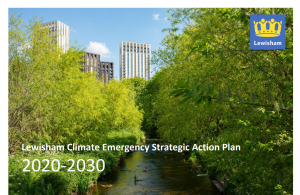 Lewisham Council declared a climate emergency in February 2019. The Council has set a target to be a carbon neutral borough by 2030.  The Council has shown significant ambition reflecting the urgent action that is needed and is being demanded by the public.

Lewisham Council contracted Aether, together with CAG and Future Climate, to provide support in defining the route to carbon neutral for the Borough. The challenge was to quantify, as far as possible, what is needed to achieve carbon neutral in the Borough by 2030.  The work was the first step to enabling the Council to develop a detailed action plan across the Borough.

The project team provided support through a variety of tasks:

In considering the boundary for the emissions, the team established what is measurable (with data available) and also what is within the control of the Council and, separately, what is influenced by the borough’s businesses and residents. Some aspects could be readily quantified, using Council or published data, but other sources could not be directly quantified (e.g. aviation emissions for flights taken by local residents, or the carbon footprint of food consumed within the borough).

Aether used their Excel based Carbon Scenario Model (CSM) to calculate a carbon footprint for the borough’s current emissions and emission reduction trajectories up to 2030 including impacts of actions.

Implementing the scale of action identified through the analysis will require significant ambition and funding.  Initial estimates of investment costs have been made, but there is significant uncertainty at this stage before projects are defined in more detail. It has been important to Identify which actions are within the control of the Council and related agencies such as housing associations, and those that will require the involvement of other stakeholders or policy decisions and investment by the GLA and central Government.

Lewisham Council now has a better understanding of the types of actions required within the Borough to work towards their net zero target.  In March 2020, the council became one of the first London Boroughs to publish its Climate Emergency Action Plan. The action plan has been developed building on Aether’s analysis together with input from public consultations.

The next steps for Lewisham will be to add detail to the individual elements of the plan: to continue to build on public pressure to engage with people and make positive changes; to undertake detailed feasibility assessments for investments; and to make demands on the GLA and Central Government to enable the significant changes that are required to meet the challenges of reaching net zero carbon.

If you would like to talk to CAG about how we can support your organisation develop a zero carbon action plan, please contact Tim Maiden – tm@cagconsult.co.uk