On a drizzly Monday evening in January, 50 or so of CAG’s partners, colleagues, clients and friends got together in a pub to set the world to rights.

We asked everyone to consider what ‘one thing’ they would do, if they were mayor, to make London a fairer and more sustainable city.  To kick off the discussion, we invited four speakers, representing different strands of sustainable development, to give us their ‘one thing’.

TRANSPORT: Professor Paul Ekins, from UCL, got the discussion rolling with an impassioned plea (not least because he’d been knocked off his bike twice in the past year!) for an expanded congestion charge that is used to fund sustainable transport. Recognising that, politically, this is a difficult policy, he bemoaned the referenda approach, in which residents are simply given the choice of paying more to drive in their city, or not. He emphasised the importance of setting congestion charge proposals within the context of a wider vision, that of building a “proper living city”, with liveable, safe streets and proper provision for walking and cycling. 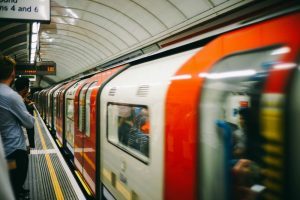 Kolm-Murray, from the London Borough of Islington, would focus his attention on the state of London’s housing stock.  Currently, for every £1 Londoners spend on the energy company obligation, we only get 50p back and London’s housing stock is losing out as a result.  London would benefit from adopting a Scottish approach to funding energy efficiency retrofit measures.  “Scotland has decided that the energy obligation is rubbish”; instead, they’re giving an allocation of funding to each local authority area based on a formula of need.It would cost around £77m a year to replicate this in London on the scale of Scotland – but there are various carbon offset funds that could help to fund this.

RESILIENCE: Mary Stevens, formerly Head of Strategy, Partnerships and Local Flood Risk Management at Defra, would focus her attention on increasing London’s resilience to climate impacts through de-paving and greening over London’s front gardens, a proposal she described as “beautifully simple, but with wonderful benefits”. She pointed to the urgency of the issue, with urban flood risk second only to pandemic flu in London’s risk register and London’s water bill payers currently paying out more than £80 per year each to sort out London’s sewers. “More mindful use of water,” is needed and Mary spelled out the ‘virtuous cycle of change’ thatgreening London’s front gardens could deliver, including: reducing surface water runoff by as much as 50%; reducing greenhouse gas emissions, through less pumping being needed in sewers; improving air and water quality; and delivering community benefits through bringing neighbours out on to their streets.

JOBS: Strategic planner Martin Crookston would focus his attention on employment.  London, with its burgeoning economy, has a higher rate of unemployed young people (16% of 16-24 year olds) than the UK as a whole.  Martin would ensure that people who live near major workplaces are able to get work in those areas.  “People on the White City Estates are surrounded by work – but they’re not getting it.”  The key is the process – not the numbers; have a strategic approach linking boroughs and employers with a local focus.

Participants’ comments reinforced the speakers’ suggestions.  Many chose to focus their ‘one thing’ on sustainable transport, for example extending the city’s cycle hire scheme and the congestion charging zone; banning the vast majority of motorised vehicles inside the M25 (or allowing only electric vehicles); prioritising infrastructure for walking and cycling.  There was also a suggestion of introducing live air pollution signs on major roads, with high pollution days auto-triggering road closures and pedestrianisation.

Others focused on housing, with suggestions of more affordable homes, taxing empty, second or non-resident homes, having cheaper prices for young people and refusing planning consent for any development where the developer is registered in a tax haven.  There was also a suggestion of a Mayor-backed renters’ union. 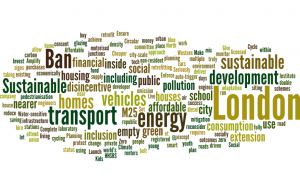 Some focused on sustainable energy, with suggestions of fully retrofitting all London’s stock, enforcing the Housing Health and Safety Rating System, and launching a fully-licensed energy supply company.  Others chose to make their ‘one thing’ about making London a zero carbon, smart city; “Make London the world’s first city-scale living laboratory.”

There were also references to climate adaptation; focusing on water-sensitive urban design and giving adaptation and resilience the same status as mitigation.

A couple of participants focused on social inclusion, with suggestions of a youth committee focused on sustainable consumption.  And another two focused on planning, with one focusing on ensuring the London Plan requires all development to be truly sustainable and another suggesting that the Green Belt be reconsidered.

And last, but by no means least, there was a suggestion that London should become a people’s republic and should join the EU.

We were all uplifted and encouraged by the fantastic diversity of enthusiastic ideas – and we look forward to working with many of you to bring some of these to fruition.