From 2013 – 2018, CAG was a key partner on the UK Power Networks ‘energywise’ project, funded under Ofgem’s Low Carbon Network Fund.  energywise involved trialling smart meters, time of use tariffs and critical peak rebates with social housing tenants in the London Borough of Tower Hamlets.  One of the project aims was to look at how these customers might be able to shift their energy consumption to help reduce strain on the electricity network during peak times; typically 5-8pm in the UK.

Trial 1 involved installing smart meters and providing some energy efficiency devices (LED lightbulbs, an eco-kettle and a powerdown plug).  In trial 2, credit customers were offered either a static time of use electricity tariff (with free electricity from 9am-5pm on their choice of Saturday or Sunday). Prepay customers were offered a ‘critical peak rebate’, which involved them being alerted by text message to peak periods (typically 5-11pm, one evening per week). Customers who reduced their demand during these periods were rewarded with additional credit on their meters; receiving 10 units back for every unit of energy they saved.

In terms of network impacts, trial 1 showed a promising 5.2% reduction in average evening peak electricity consumption.  Trial 2 reductions were lower, at up to 2.2%. However, in terms of participant impacts, the potential savings under Trial 2 were much greater.  Trial 1 saw participants save an average of £14 a year, whilst Trial 2 saw an enormous range in savings, depending on the ability and willingness of households to shift their energy use to off peak times.   Participants on the static time of use tariff (‘HomeEnergy FreeTime’) saved an average of £6 a year, but over £50 in some cases. Participant on the critical peak rebate (‘Bonus Time’) saved an average of £37 a year, and up to £111; impressive figures given that participants were relatively low energy users.

For both Bonus Time and HomeEnergy FreeTime, it was found that households possessing large flexible appliance loads (e.g. tumble dryers, electric cookers and secondary electric heating) were more able to shift their electricity demand.  Research found that customer engagement and understanding of the operation of these flexibility products is vital, with interview feedback indicating that the HomeEnergy FreeTime tariff was an easier flexibility product for participants to understand and respond to than the Bonus Time offering.  (Although some participants were extremely enthusiastic about Bonus Time, as shown by the quotes in the adjacent image.) 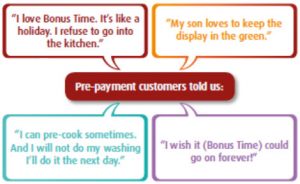 In both cases, some participants reported that they were not able to actively engage with the schemes, for example because their household routine doesn’t afford them flexibility in when they use electricity. In addition, despite careful development of the messaging around Bonus Time, and testing this with a number of participants before rolling it out, we found that a small number of participants initially thought they were supposed to increase demand, rather than reduce demand, during Bonus Time events.

As the smart meter rollout continues, it is anticipated that more energy suppliers will start to offer these types of ‘off peak’ tariffs.  Findings from energywise suggest that some, but certainly not all, lower income customers could benefit financially from such tariffs – but that care must be taken to ensure participants don’t misunderstand how these tariffs work.

Further details on the project’s impacts can be found here.