BEIS has recently released the interim report of their evaluation of the public sector energy efficiency loan scheme – the scheme is more commonly known by the name of its operator, Salix Finance.  The overall evaluation is being led by Winning Moves, in close collaboration with CAG and UCL. CAG devised the theoretical framework and led the qualitative research which provides the main source of insight for this interim report. 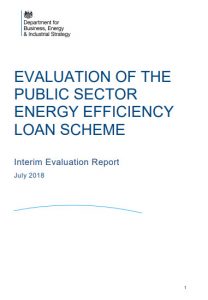 The interim report contains an Executive Summary, but in brief the scheme was found to be well regarded by users and to play a significant role in enabling eligible public bodies (local authorities, schools, Further Education, Higher Education and NHS Trusts) to implement energy efficiency work. Perhaps unsurprisingly LED schemes were predominant – reflecting the rapid maturation of this technology.

Whilst the scheme is well known to public bodies there is considerable variation in uptake between sectors with participation rates ranging from 76% (HE institutions) and 26% (local authorities) down to 9% for NHS organisations and with only 1-2% of schools taking part.  (NB These figures apply only to organisations accessing the scheme between 2013/14 and 2016/17; the scheme has been in operation since 2008.)  Some possible reasons for this are explored in the interim report, but they include variations in financial administration procedures and practices, and capacity (a lack of which is a particular problem for schools).

A final, Phase 2, programme of work will run from Autumn 2018 through until the summer of 2019.  The report can be accessed here.  For further details regarding CAG’s work please contact Bill Kirkup at bk@cagconsult.co.uk