Earlier this year I wrote a blog looking at the future renewable energy market in Scotland – “the future isn’t what it used to be”.  This time, I thought I would write a renewable energy retrospective, by way of my own personal observations. As there are 20 years to get through, I have split it into two parts.  Part 2 to follow.

It was acceptable in the 90’s

1997. New Labour had just swept to victory, Lord Sewel was the Scottish environment minister and I was enjoying my first full time job editing the Safe Energy Journal [1] at Friends of the Earth Scotland. The NIREX nuclear waste deep repository in Cumbria had been refused planning permission (on appeal) that same year, the Dounreay fast reactor had been switched off a few years earlier and nuclear fuel reprocessing on the site was being phased out [2]. Although in origin the Journal was anti-nuclear, renewables were rapidly beginning to fill more copy.

The renewable show-in-town at that time was the Scottish Renewables Obligation (SRO). This being before work-based email or ready access to the internet, I did my research by cold-calling as yet little-known renewable energy generators, and poring over faxed copies – the consistency of loo roll from a car park toilet block – of the relevant legislation.

The SRO was the Scottish and renewable part of the Non Fossil Fuel Obligation (NFFO) regime introduced at electricity sector privatisation. Many people then associated the subsidy with renewables, but in fact the nuclear NFFO dwarfed the renewables one.

The 1990 nuclear NFFO subsidised the state-owned nuclear fleet within an otherwise privatised industry. It provided a guaranteed price and term for power station output. There was no competition between generators for these contracts and the price was set by government. When the more modern AGRs were privatised in 1996, an obligation on supply companies in Scotland to purchase all of the output from nuclear power stations remained in place, again at a mandated price.

Under the SRO, the (UK) government auctioned off PPAs in technology bands, in periodic auction rounds. PPAs were with a supply company-backed counter-party, and they paid generators the difference between a set reference price and their bid price. In England and Wales the reference price was set by the Electricity Pool operating there.  They weren’t called Contracts for Difference (CfD) then, but had similarities to them. Generators didn’t have to, and almost always didn’t, have a real project when they entered an auction. Instead, winning PPA-in-hand, they then went away to develop the project.

Or not, because one of the problems with the regime was that some of the bids turned out to be overly optimistic and they couldn’t make the projects work. One of my articles from that time quotes the British Wind Energy Association [3] as being “very, very disappointed” because members had lost up to £15-20,000 on unsuccessful bids, and speculating that the winning bidders were unlikely to realise their projects (they didn’t). This might have been mitigated by a larger auction, but another problem was that the Scottish reference price was quite low, so a few projects could use up quite a lot of the SRO budget.

I began to realise that policies and regulations made or broke a project. Like John Lewis, full electricity de-regulation hadn’t reached Scotland yet, it had been a bit of a closed shop and renewables were finding it difficult to be accepted. The received wisdom was that Scotland had over-capacity of generation, and wouldn’t need any more for some time.

I upped my game and started reading orange OFFER [4] (Office for Electricity Regulation) reports on grid access and ringing up engineers in Glasgow (Scottish Power) and Perth (Scottish Hydro) to discuss capacity margins. Something I never thought I would be doing when I graduated in zoology!!

At the same time, it was getting harder to keep the journal going. New Labour had said it would not support (subsidise) nuclear new-build, and re-processing was now largely a Sellafield issue covered by colleagues over-the-border. The bottom was falling out of the anti-nuclear market and I was obliged to look for another job. 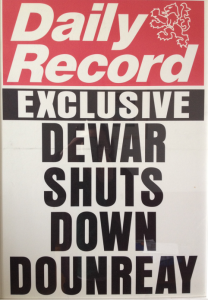 Time to look for a new job

For a brief period I worked the phones for a low income household energy efficiency scheme, swapping old-for-new fridges. It was policy at the coal face, trying to explain to those without any fridge that there was no energy to be saved in giving them a new one. Colleagues on lightbulb schemes would deliver and physically install new Cfls, sitting a minute or so in the dark waiting for them to kick in (mine are still going strong!)

I sent letters out to energy companies showing off my knowledge of all those OFFER documents and in 1998 I started work with renewable energy engineering consultancy Garrad Hassan (GH). Then employing around 30 people UK-wide it was founded by Andrew Garrad and Unsal Hassan, both engineers from a British Aerospace venture into wind energy. They survived the lean UK 80s and 90s by exporting their expertise to burgeoning American and European markets.

By the time I joined GH the UK market was growing, but you could still comfortably host the industry Christmas dinner in an Edinburgh pub basement. The new Renewables Obligation (RO) was being developed, with tradeable green certificates at its core. My boss suggested I do my policy research using something called google [5].

Tradeable certificates (ROCs) allowed access to the larger market in England and Wales, although it was still pretty hard to export actual electricity because bookings on the Scotland-England interconnector were taken up with nuclear and coal. Early meetings of the Scottish Renewables Forum [6] were spent debating this at length. A few years later Ofgem merged the Scottish and English and Welsh markets, and the interconnector was no more (again, a lesson in how regulation can be transformational).

The RO was originally unbanded. The dream was to have an uncomplicated, competitive, one-size-fits-all mechanism to reward the cost-effective technologies, more expensive ones coming in when the cheaper ones were exhausted. It would work on its own, market-driven and without the need for intervention.

ROC-eligible projects had to be real rather than on-paper, which meant much larger up-front investments. Some of the cheapest projects were large and utility backed. As large onshore, utility wind looked to dominate, government intervened in favour of technology and size diversity with the introduction of banding. Later on, developers started to worry they would run the multi-£M gauntlet of planning and grid, only to find the ROC price collapsing as the Obligation filled up. Permanent headroom in the Obligation was introduced to avoid this.

Later still, feed-in tariffs were introduced to encourage domestic and community-scale generation. A guaranteed price available for anyone that installs eligible generation, and often minimal if any grid connection requirements, this was a deliberately open access scheme (although of course several £K for a solar panel isn’t in reach of a lot of people – somewhat overcome by later schemes which leased projects to householders).

So from an initially quite simple scheme, the policy landscape became progressively more complex, in a desire to respond to the diversity of technologies and investors.

In Part 2, the RO years and a transition over to Electricity Market Reform.

[1] Formerly published by SCRAM, the Scottish Campaign to Resist the Atomic Menace