Development activity in anticipation of the new market started several years before its 2001 introduction.  There was no shortage of interested investors – major utilities, inward investors and new-kids-on-the-block – attracted by the potential returns of course, but also by the size of the market.  Developers still building out their SRO projects had RO-envy but (rightly) weren’t allowed to jump ship.

The industry Christmas bash moved from the pub, to a museum, to a conference venue.  Small companies were bought out, new companies formed, who were bought out again. The RO generated activity before electricity!  In 2007 I started work for a specialist company set up to service the grid side of renewables, and there was plenty to do.

ROCs by and large were not the scarce resource.  Grid access, suitable sites and planning permission were.  For grid this meant forming an orderly(ish) queue for a connection and, later on, relaxing some of the gold plated security standards which dictated how much grid had to be built before a generator could connect.  This ‘sweating’ of existing assets meant more management of congestion at pinch points on the grid on a day-to-day basis – hence the underpinning policy was called “Connect and Manage.”

Of course this could only go so far. The onshore Inverness to Stirling upgrade (Beauly Denny) is only just finished and a “bootstrap” subsea link from Ayrshire to Wales is mid-installation.  The former 137 mile onshore route was in planning for 10 years, the latter 262 miles of subsea cable comparatively flew by in a few years.  Both cost around the same per MW installed.

Some developers became much more imaginative in site selection and development, giving us for example the city outskirts Whitelee wind farm, (then at least) Europe’s largest onshore wind farm and one of Glasgow’s most popular (rider: its free) destinations.  Essentially a country park with a wind farm in it, the only part you can’t walk up to or ride around is the substation (although at my last job – and as a special treat – we drove around single track roads until we found it). At the same time it is fair to say some developers were vying with each other for the most community-friendly badge, enhancing and diversifying community benefits.  Naturally developers wanted to secure planning permission, but higher margins also meant they weren’t as restricted in their options as before. 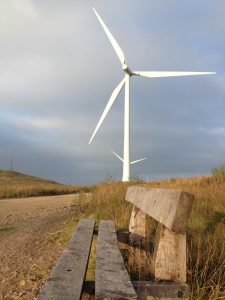 A trail at Whitelee

In 2010, the coalition government came to power.  The co-alition agreement mirrored labour’s policy of not subsidising new nuclear power.  Whether labour was on course to change its mind we won’t know, but the coalition government was the one that implemented the change.  In the same year DECC published proposals on Electricity Market Reform (EMR).

For the purposes of this article, I am going to focus on the CfD side of EMR as they – alongside a budget set as part of the Levy Control Framework (LCF) – are intended to replace the RO and newly provide for nuclear.  Out front in terms of objectives for the reform was meeting binding EU energy targets, which the government said meant about 30% of electricity demand being met by renewables in 2020. Then it was 7%, and it is around 19% now.  It is easy to think that success is all just about getting projects built, but with this kind of growth (contributing to which is increases in energy efficiency), there is plenty of room for clever stuff on the operational side.  On the 50th anniversary of Cruachan, the pumped storage plant in the hollowed out insides of a west coast munro (visitors centre – check), I can’t help dreaming of a big red market signal that has storage written on it.

Anyway, I diverge. Part 1 of this blog describes the old NFFO / SRO policy and lays the groundwork for making comparisons with EMR.  In design, the two are quite similar: for renewables competitive award of CfDs in auction rounds, subsidy levels a function of both a reference price and a strike price, and a long term contract signed with a purpose-designed company (which under EMR is the Low Carbon Contracts Company and under the SRO was the Non Fossil Purchasing Agency, NFPA); for nuclear, its non-competitive award of subsidy contracts.  There are also similarities with the early RO, in so far as only then did renewables (in theory, at least) compete across technology bands – as they have done and are planned to do under EMR.

There are also differences.  For renewables a key difference is that bidding projects must be more or less real, compared to the largely on-paper SRO bidding projects. Under EMR they need a grid connection, planning permission and be ready to make Final Investment Decisions soon after being awarded a contract.  For nuclear it is almost the opposite – under NFFO they were already operational, but under EMR whilst Hinckley has a grid connection and planning permission, it is not operational and will be the first nuclear new-build in the UK for decades.

Lower cost and ultimately subsidy-free renewables was always the long-term aim of renewables policy.  EMR, like SRO, has been successful in reducing costs.  The flip side is to make sure those projects are actually delivered, that cost reductions are sustainable and that projects remain diverse and innovative.  The government recently attributed “accelerated developments in technological efficiency” [1] in offshore wind to some LCF over-spend, but lets not forget these kind of improvements are exactly what the RO was designed to produce, and represent long term cost reductions which EMR is now revealing.

The first EMR auction has also seen pretty decent levels of participation, but as the RO backlog clears, things will change.  If a CfD is a project’s only route-to-market, there is a very large investment at risk in securing planning and grid before you can even enter the auction – something that individual / small / high-up-front investment projects will find at best very difficult. It also means that the grid companies and planning authorities will need to process and plan for projects that will not be realised.  But, right up to the wire (no pun intended) they won’t know which ones.  So this means these organisations adjusting to the new circumstances – this isn’t just admin. costs: grid investments have a long lead-time and major investments cost hundreds of millions of pounds. Investing for the wrong projects can be a costly mistake.

Yes cost reduction is desirable, and it is understandable why projects need to be so well advanced before they enter an auction, as it should improve chances of project delivery.  But a single route to market for a uniform group of developers and projects is not particularly desirable.  Diversity is good for energy security and its good for the economy.

Part of the puzzle may be to be a look at the regular market for those technologies and projects which might have a shot here.  What more can be done to make it more intermittent and independent-appropriate?  For example the NFPA which is still the counterparty for the tail end of SRO and NFFO contracts has evolved to help projects find an outlet for their energy and ROCs.  Is there a role something like this could play, to improve liquidity (the opportunities for buying and selling your power)? Are one-size-fits-all balancing and settlement arrangements giving intermittent plant the right incentives? Or is it wishful thinking that wholesale markets still mostly driven by (unpredictable?) fossil fuel prices is somewhere that new capital-intensive plant can survive, without any kind of hedge or long term purchase arrangement?

And then there is the politics. Its pretty unarguable that over the last 20 years (and more, that’s just how long I have been working in energy), renewables (and nuclear) fortunes have been linked to the government in power. A philosophical discussion on the merits or not of this is a whole new blog piece. Economists often argue there should be no intervention, I just don’t know of anywhere that has trusted the likes of the energy trilemma wholly to the market, and where all of the potential market failures have been addressed.  Privatisation has been good at shining a light on costs – I remember as a campaigner having no clue what nuclear power cost before its privatisation – and it is accurate information which helps make the best decisions in the end.

Last year, I joined CAG and amongst other things have enjoyed re-visiting some areas I haven’t been for a while, like energy efficiency.  It’s a whole new world now, controlling your heating with your phone, bulbs of all shapes and sizes that cast light at the flick of a switch.

I’m also starting to think about nuclear power again, something I’ve not done in some time.  Not so much ‘when the wind blows’ (English nuclear holocaust, Snowman-style), more the bleak SRO years when renewables got nuclear’s leftovers.  Politics influencing not just the direction of energy policy after an election, but the size and shape of the renewables industry year-on-year, hanging on a ministerial decision on the eligible technologies and budget for each – and – every – auction.

I don’t know if it will be like that.  It is not an inevitable outcome from EMR, which is very much in the hand of the beholder. Even if Hinckley C is built it could be a decade or more away. A decade ago the UK had two offshore wind farms. It now has twenty seven.  Installed capacity has increased forty two fold and individual turbine capacity has tripled.

I actually didn’t know that until I just worked it out. Not too shabby.